Why Washing Machines Are Learning to Play the Harp 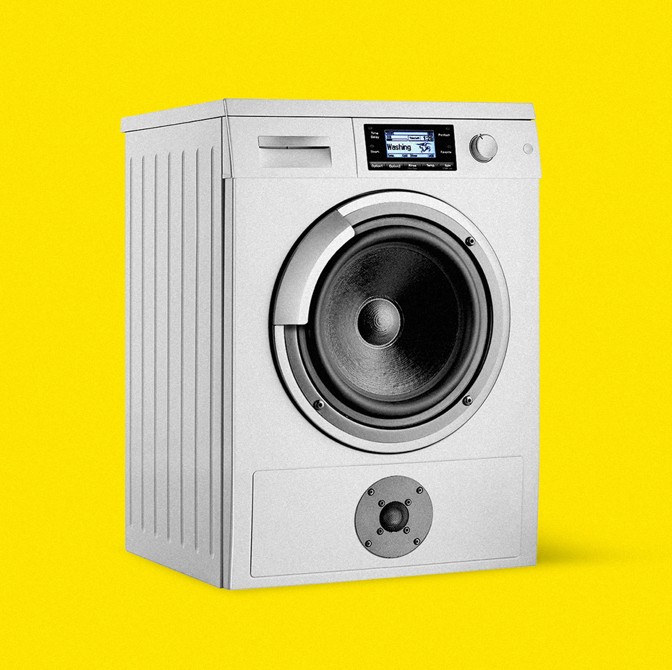 The roar of the MGM lion. NBC’s iconic chimes. The godlike C-major chord of a booting Apple computer. Companies have long used sound to distinguish their brands and to create a sense of familiarity with, and even affection for, their products. Microsoft went so far as to tap the ambient-sound legend Brian Eno to score the six-second overture for Windows 95, a starry ripple trailed by a fading echo. Lately, however, the sounds have proliferated and become more sophisticated. Amazon, Google, and Apple are racing to dominate the smart-speaker market with their voice assistants. But a device need not speak to be heard.

No longer do household machines merely bing or plink or blamp, as they might have in a previous era when such alerts simply indicated that the clothes were dry or the coffee was brewed. Now the machines play snippets of music. In search of ever more tailored accompaniment, companies have turned to experts such as Audrey Arbeeny, the CEO of Audiobrain, which composes notifications for devices and machinery, among many other audio-branding pursuits. If you’ve heard the start-up pongs of an IBM ThinkPad or the whispery greeting of Xbox 360, you know her work. “We don’t make noise,” Arbeeny told me. “We create a holistic experience that brings about better well-being.”

You may be skeptical that an electronic jingle, however holistic, can make doing the dishes a life-affirming endeavor—or even one that might bind you, emotionally, to your dishwasher. But companies are betting otherwise, and not entirely without reason.

[Read: How digital technology is transforming our relationship with sound]

Human beings have always relied on sound to interpret stimuli. A good crackle is a sure sign that wood is burning well; the hiss of cooking meat might be the original branded audio experience. Pre-digital machines offered their own audio cues: Clocks ticked; camera shutters clicked. The noises may not have been intentional, but they let us know that stuff was working.

An early example of a device that communicated data through sound was the Geiger counter. Invented in 1908 to measure ionizing radiation, it makes an audible snap to signal the presence of alpha, beta, or gamma particles. (Viewers of HBO’s Chernobyl will understand why this is useful: The person operating the device can simultaneously observe the surroundings for visual cues of radiation.) Decades later, a researcher at Lawrence Livermore National Laboratory studying machine interfaces popularized a term for sounds that act as vessels for easily recognizable information: earcon. Like an icon, but aural instead of visual.

In the 1950s and ’60s, advances by Japanese manufacturers in piezoelectric technology—squeezing crystals between metal plates to generate energy—helped usher bleeps into the consumer market. One of the first musical notifications by a household machine was inspired by the Prohibition-era lyric “How dry I am,” featured in the 1952 Westinghouse D-5 Dryer. By the 1980s, kitchen appliances around the globe were emitting monophonic beeps to alert us to the progress of our coffee, dishes, and laundry. (So, too, were in-home smoke detectors, digital watches, and a host of other new devices.)

The digital revolution—and the shrinking size and cost of computer chips—means that consumer goods are now capable of playing MP3-quality audio files. Some of these sounds remain fairly plain: You’ve perhaps heard an LG washing machine play a little ditty at start-up (do-di-deedle-di-di!). But the trend is toward more complicated compositions with loftier ambitions (and not only for household appliances, but for automobiles, credit-card readers, food-delivery robots).

At Audiobrain’s Creamsicle-colored offices in Manhattan, I listened to some of Arbeeny’s recent work for Whirlpool. One machine, the Whirlpool Smart All-in-One Washer & Dryer, is designed to complete full loads in a single machine. Arbeeny was tasked with composing sounds that would amplify Whirlpool’s “Every Day, Care” campaign, a marketing scheme intended to evoke feelings of familial tenderness and acts of love (because nothing says love like laundry). To suggest an intimate touch, Arbeeny recorded fingertips drumming on denim. The washer’s start-up theme is a bubbly harp melody. Another product, the KitchenAid Smart Oven+, is geared toward “any cook looking to unlock their creativity”: When starting up it plays a trill of custom-made kalimba; the tick of its digitized timer is reminiscent of a clinking spoon.

Arbeeny contrasts the layered, polyphonic compositions she’s created for these appliances with the grating bleeps of microwaves past. They’re softer, for one, and more personal. “It makes you feel like there’s a human playing that harp for you, plucked by human hands,” she said. Inside the conference room where we sat, we could hear an air conditioner groan. “And it doesn’t sound like that,” she added.

The sounds are still intended to be functional. Our machines prod us—ever so gently!—through our tasks. But they also set a mood. The person washing socks becomes the “hero” in a domestic drama, Brandon Satanek, the global senior manager of product and digital user-experience design at Whirlpool, told me. An appliance’s notifications provide the soundtrack to that movie, which follows an emotional arc. When the KitchenAid Smart Oven+ finishes preheating, it plays a hopeful phrase (da-da-di?), while a finished bake is accompanied by a triumphant da-di-dum! Likewise with the washer/dryer. “There are certain happy events in those situations,” Satanek said. “When you’ve finished washing your clothes, and you’re ready to smell those clean clothes, it’s a moment to celebrate. We want to reinforce those things in a really positive way with the sounds.” Cue the harps.

These companies believe that bespoke sounds deepen customer loyalty: If you like what you hear, Satanek explained, you will develop brand allegiance, replacing a Whirlpool with a Whirlpool, and seeking out other members of its product family.

Whether this is a realistic bet or wishful thinking is an open question. Sound is more visceral than sight, Daniel Levitin, the celebrated neuroscientist and author of This Is Your Brain on Music, told me. We’re more easily startled by sound because, unlike vision, it’s processed directly in the brain stem. But first, sound waves cause our eardrums to vibrate. “They sound like they’re coming from inside our heads,” Levitin said. “That’s very intimate.” In the 1990s, Levitin researched how sound might be built into Microsoft’s operating systems, which were trying to keep up with Apple’s earcons—the intuitive crumple of an emptying trash can, the pleasing whoosh of outgoing email.

A wealth of studies in consumer psychology attests to the power of sound to affect our decision making. In one famous experiment from the ’90s, British wine shoppers bought five times as many French bottles as German bottles when French accordions played in the store; when an oompah band sounded, German wine outsold the French. Still other studies have suggested that slot-machine noises, often high-pitched and in major keys, can nudge gamblers to keep playing and can even encourage riskier bets.

[Read: The dawn of recorded sound in America]

A kitchen isn’t a casino, however. Can a well-considered score really make consumers more likely to buy a Whirlpool over a GE? Will the sock washer still feel heroic the 50th time he runs the machine—or merely annoyed? Audio UX, an audio-branding studio based in New York, recently commissioned a study that found that custom-made “premium” sounds, as opposed to “generic” ones, were likelier to be associated with the correct action (e.g., turning on a dishwasher) by test users, most of whom also said they’d prefer to own the brand that offered the customized cues. Those results serve the interests of the company that produced them, but the findings tracked with some of the academic work in this field. Vijaykumar Krishnan, the chair of the marketing department at Northern Illinois University, has found that changing a product’s sonic logo to a more distinctive composition can increase how much a consumer is willing to pay for the product.

But specialized sounds for household goods must be in keeping with a customer’s expectations for them, the academics warned. Too many audible flourishes from an oven—an appliance that doesn’t usually make much noise—could stand out in a bad way. “A coffee machine or a vacuum cleaner with a ringtone would be a marker of inauthenticity,” which can irritate people, says Nicolai Jørgensgaard Graakjær, a professor of music and sound in market communication at Denmark’s Aalborg University. In a Whirlpool showroom, I found the tones Arbeeny composed for the smart oven cheerful and unobtrusive. But in an actual kitchen, with a jingle emanating from the dishwasher, Slack notifications clacketing from an open laptop, text-message alerts pinging from an iPhone, and some Tchaikovsky burbling from an Amazon Echo, a harried cook might be forgiven for failing to appreciate the finer points of the KitchenAid’s preheat composition.

[Read: How a bad night’s sleep birthed the sound conditioner]

Too many sounds, carefully designed though they may be, runs the risk of turning into an irritant, or worse. Dexter Garcia, a co-founder of Audio UX, pointed me to a 2010 article in The Boston Globe describing “alarm fatigue.” Nurses at Massachusetts General Hospital had become so bombarded by constant alerts, they ignored the critical beeps signaling a dying patient. The problem is pervasive: In a study at Johns Hopkins Hospital, nearly 60,000 alarms were recorded over 12 days—that’s 350 alarms per patient, per day, hammering staff ears.

Most households aren’t quite there yet. Even as their notifications have grown more baroque, machines themselves have become quieter overall, engineered to mute hums, drones, and grinding motors. Arbeeny sees her work as battling ill-considered walls of noise, and improving upon the clunky piezoelectric blurts of old. In the abstract, she is undoubtedly realizing that goal. But as ever more appliances seek to distinguish themselves aurally, a cacophony seems inevitable, one in which even the most carefully wrought melody might be drowned out by the din. Sonic branders may be in the business of selling sound, but perhaps the first question a product designer should ask is: Could it be quiet instead? In the near future, the smartest machines might turn out to be the ones that know when to hold their peace.

This article appears in the September 2019 print edition with the headline “Why are Washing Machines Learning to Play the Harp?”